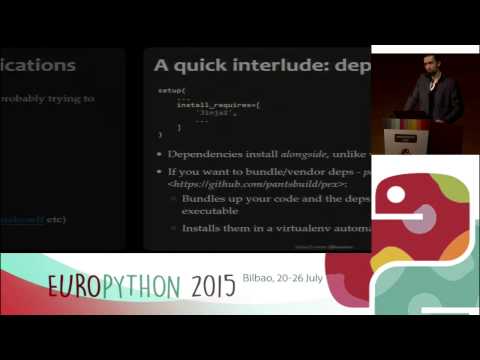 This is a nice presentation because it presents strong opinions about how to do packaging in Python. In a way, what those opinions are do not matter. What matters is that someone has thought about the tradeoffs involved and come to a decision, so that you don’t have to spend more of your own time thinking about those tradeoffs.

In a way, packaging in Python is a victim of bad habits — complex conventions, and feature bloat. It’s hard to simplify things, because all the historical baggage people want to carry around. […] Concretely what I want is […] one way to do it. Not one clear way, cause we document the hell out of it, but one, and only one, way to do it.

Packaging is a hard problem in any language and made more so because all modern languages are expected to interface with C somehow or another and C has terrible build systems that always break unless you babysit them. That said, Python does a worse than average job at it: